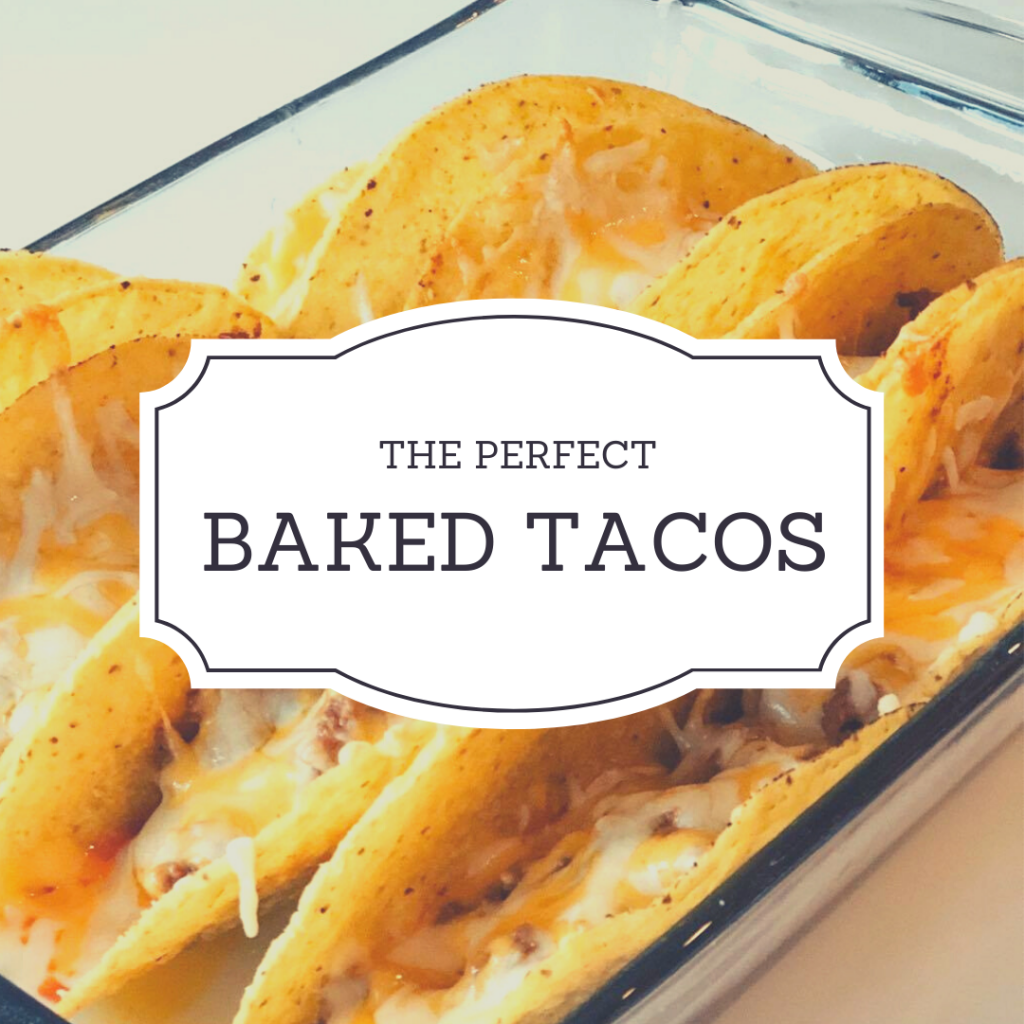 We love tacos around here. Tacos in any and every form or fashion. Taco Tuesday is very much a thing in this house! Typically, we go soft-shell. But there is something to be said about a good crunchy taco! My main beef (pun not intended, but I’m rolling with it!) is that the shells always fall apart! Which is super annoying, especially when you are typically holding a baby while eating. #momlife

One day, I discovered this handy little trick that is SO easy and will dramatically improve your crunchy taco eating experience. Not really a recipe, but rather a tweak to the way you prepare them! Try this out and let me know what you think!

First, preheat your oven to 350 degrees. Grab your favorite 9×13 baking dish and stand your taco shells in it. I was able to fit 8, but it just depends on the shells you buy! 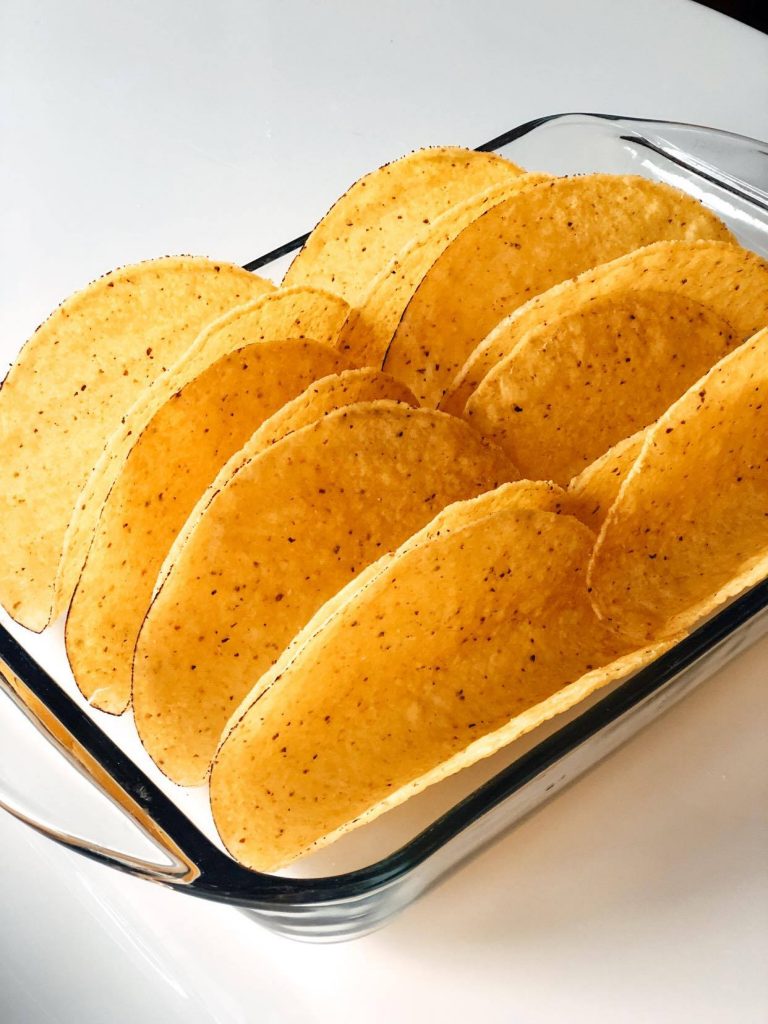 Brown 1lb of ground beef and add your taco seasoning. Spoon beef mixture into your shells! 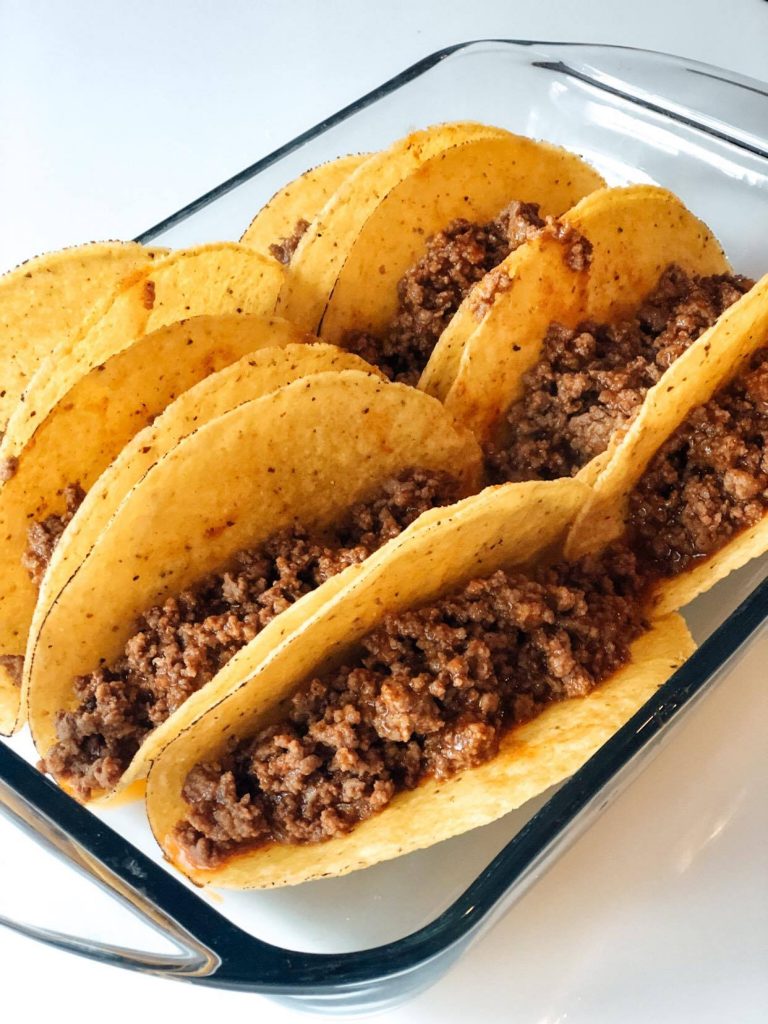 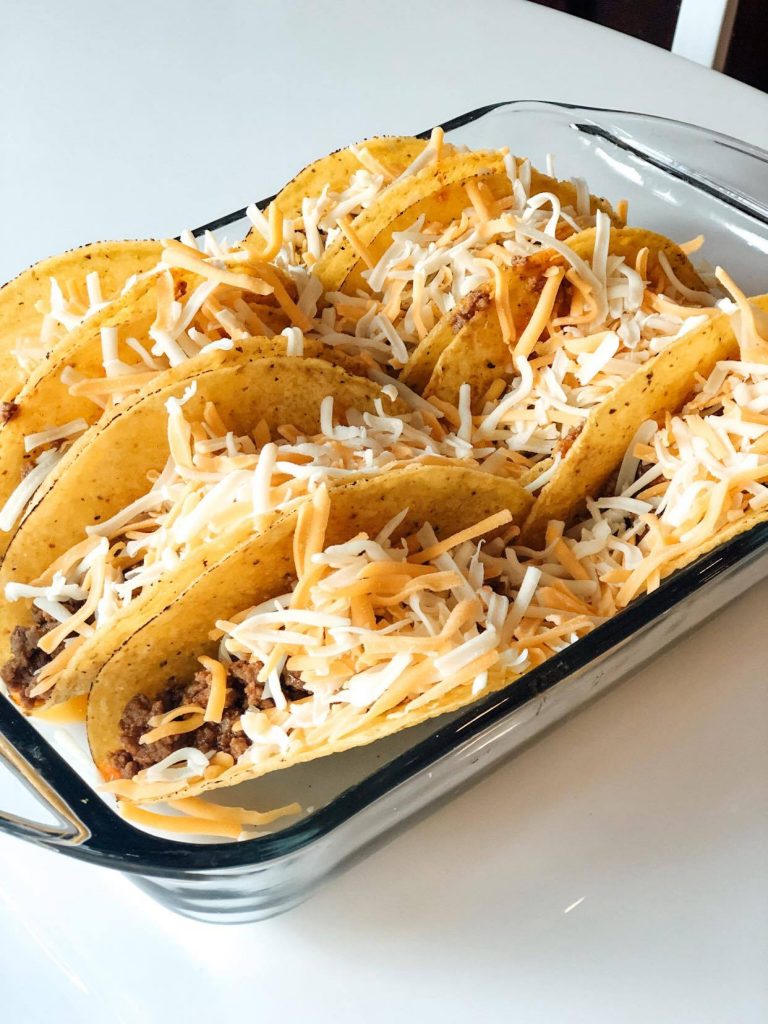 Bake approximately 10 minutes, until cheese is fully melted and starting to brown just a bit. 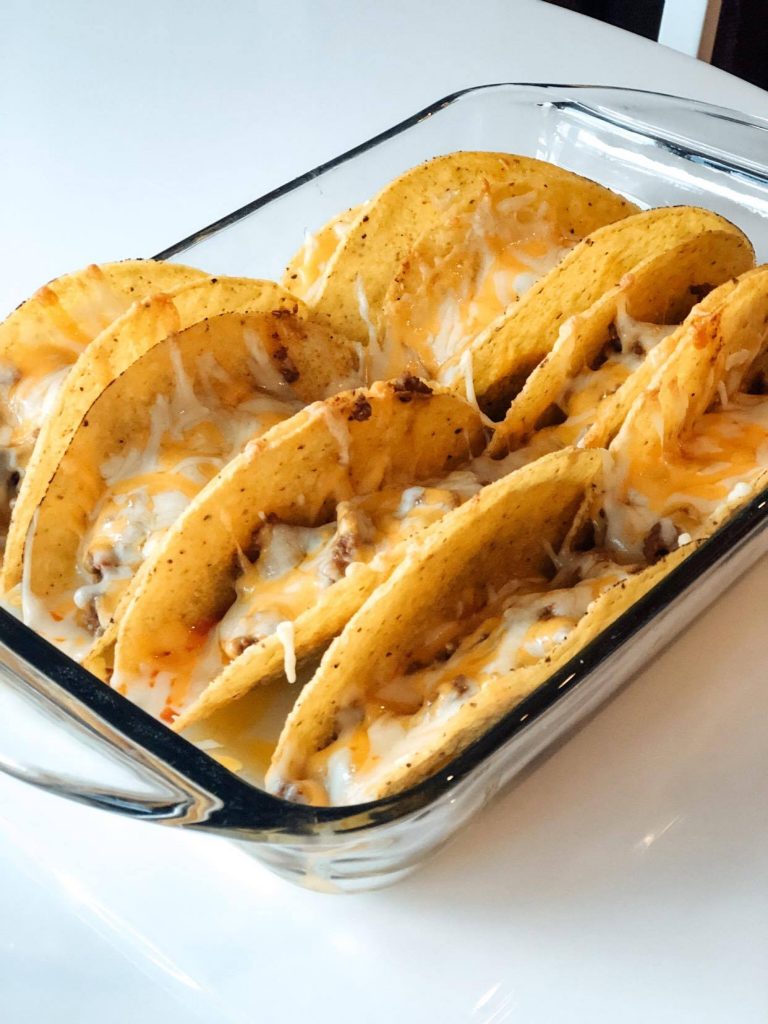 Add your favorite toppings and enjoy! The baking process makes the shells juuuust chewy enough that they don’t fall apart! But they still maintain that yummy crunch! The melty cheese holds all of your beef in, so that it doesn’t go everywhere. This is the only way to eat a crunchy taco! Try it and you will never turn back. 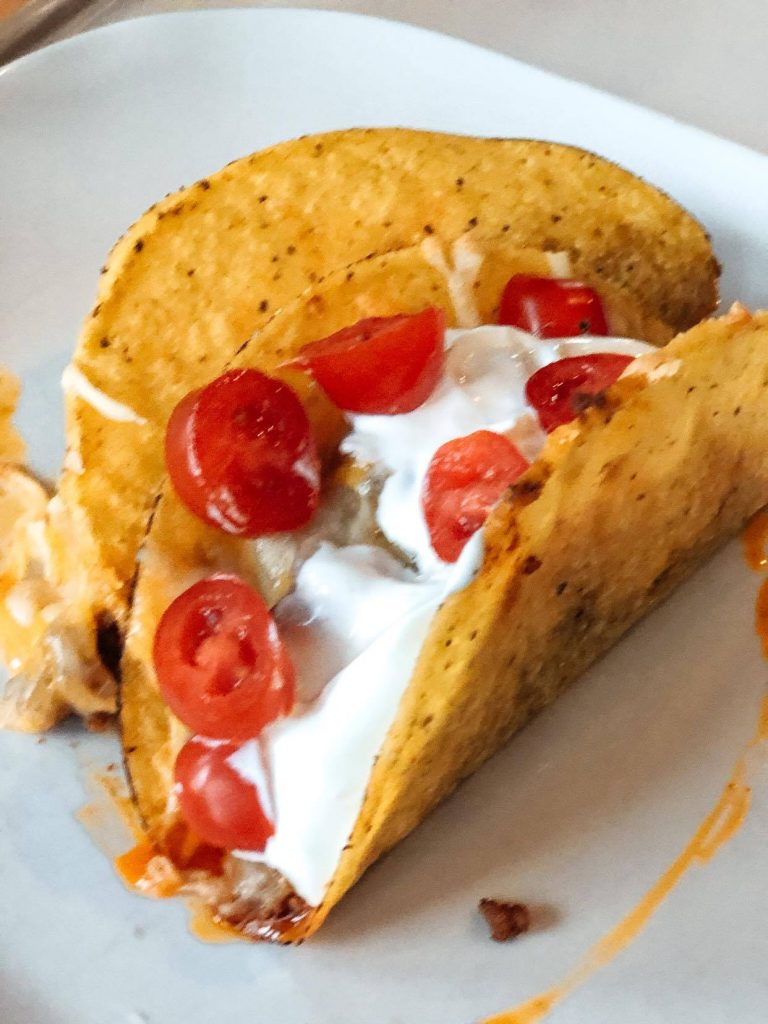 I am so excited to finally announce a new service that I am going to be offering: digital design consultations! As many of you may or may not know, I have a design degree. I also have a passion for making over spaces and interior decorating! Tie that in with a bit of an online shopping addiction, and this new project was born!

Here’s how it will work:

Your only obligation is my design fee. Anything else, you buy as you want, leave things off, etc! That’s it! Make the changes and love your new space!

Design fee is $50/space- paypable by Venmo, PayPal or CashApp and will be due up front. I will get everything to you within two weeks of payment (to allow time for sketching and finding products). Space will be limited each month, so contact me ASAP to get on the list! <3 Designs may or may not be shared on my blog (I can leave your photos out if needed!)

Check out below for some examples of work I have done! I have a major bathroom makeover in the works, too! 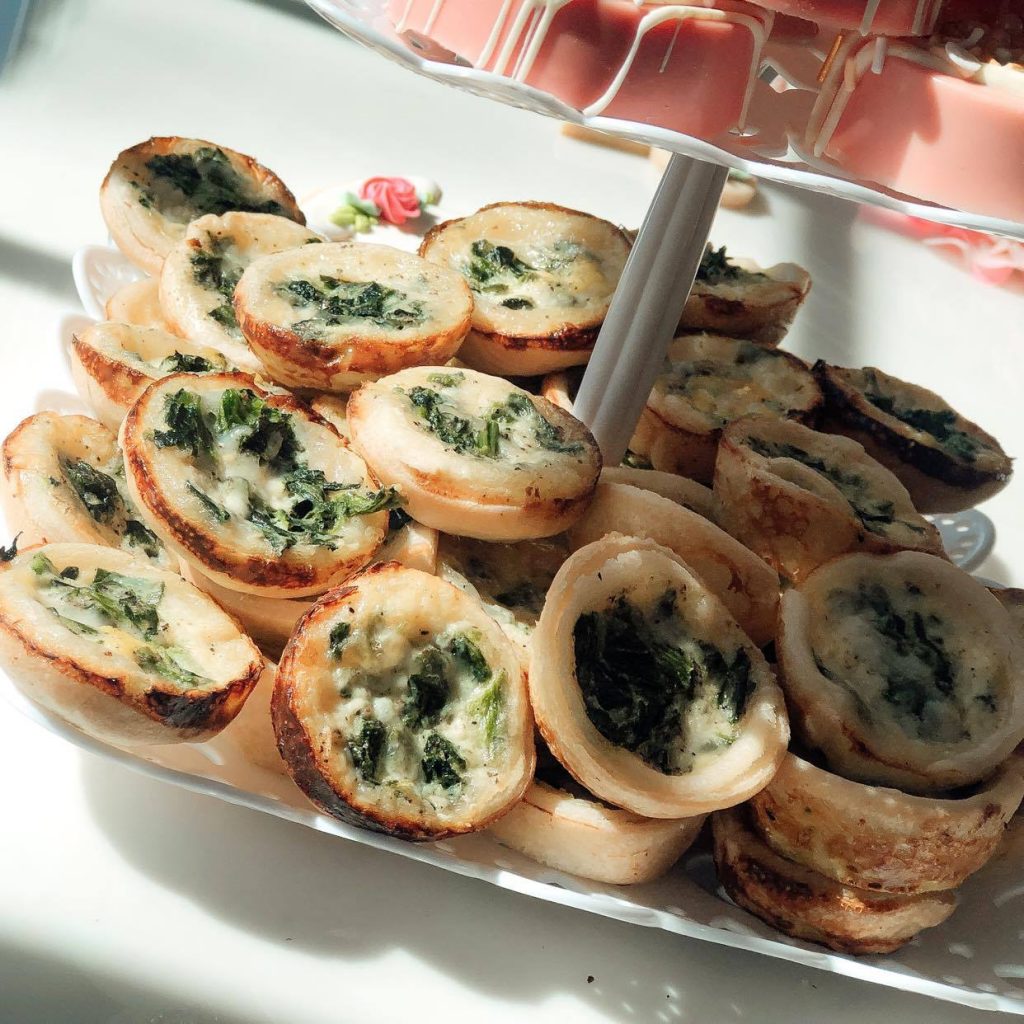 When I planned Addilyn’s Tea for Two birthday party, I knew I wanted to add a few light but savory finger foods. Being 9 months pregnant, I didn’t really want to fool with anything too complicated, and large quiches can be finicky!

So I set out to create a recipe for super easy mini quiche, and these fit the bill! All ingredients that you can grab quickly if you are in a pinch! You could totally make your own pie crust, and wilt your own spinach. But who has time for all of that?! They taste just as fantastic this way! Whip up a batch for a fancy tea party, or just a casual brunch. They are a crowd pleaser and make you look like a gourmet chef!

These can totally be made a day before and stored in the fridge! Simply heat them in a 300 degree oven until they are warmed through! That’s what I did for Addie’s party, just to make life easier the day of! 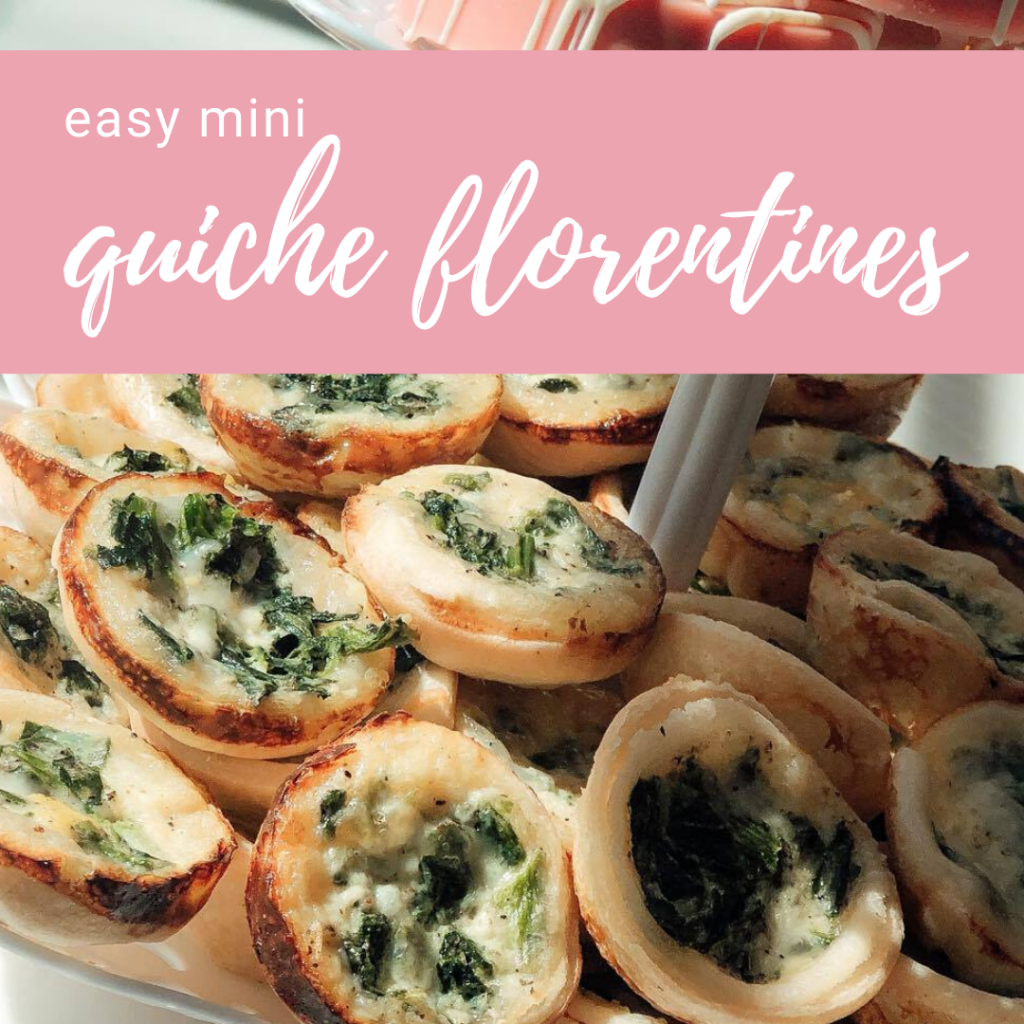 Trying to conceive can be a super stressful time, especially if you are struggling with infertility. We had our fair share of hiccups, including the loss of our sweet first child, to get to our Addilyn. Over the course of our few years of trying, I found a few things that were truly helpful, both physically and mentally/emotionally! I am here to share those with you today, sweet friends, in hopes that it can help in your season of wait! (Click the pink links to shop!) 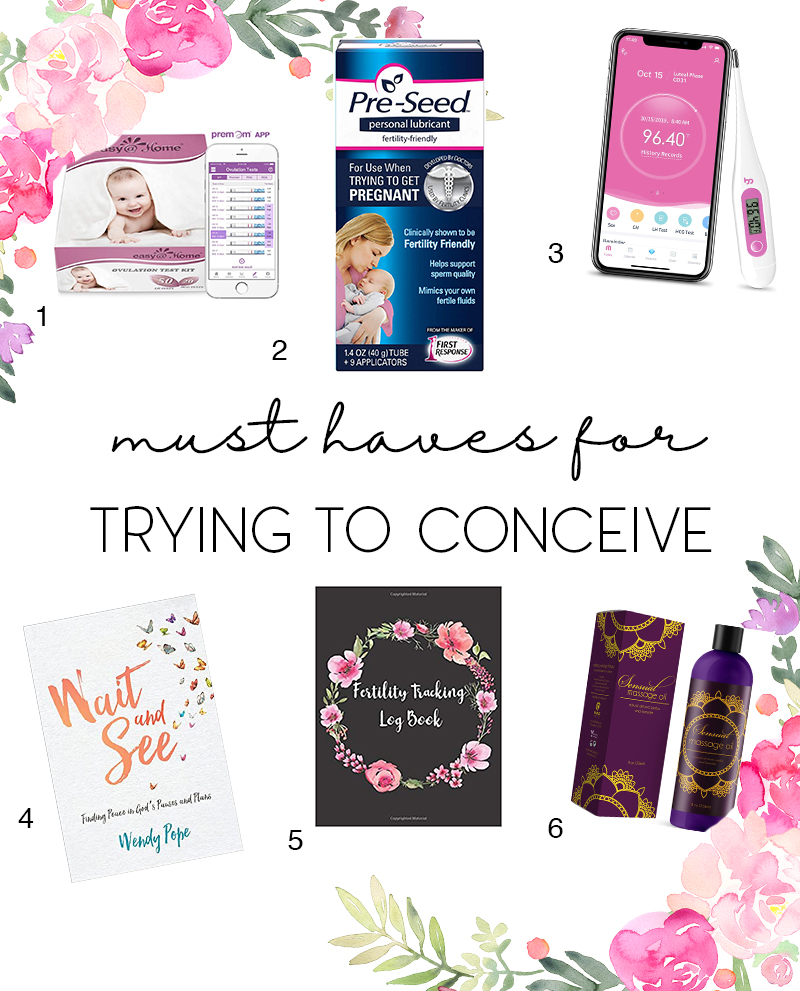 These are a major must-have, I promise!! When you are trying to conceive, it is easy to spend a small fortune on ovulation and pregnancy tests at the store. They are so dang expensive! Which only adds to the sting when you get that dreaded negative. These tests are incredibly accurate, and are actually what most medical facilities use! And at pennies on the dollar, you won’t feel bad about obsessively taking them!

It helps so much to figure out exactly where in your cycle that you ovulate. We had been trying around the standard window of when “most women” ovulate, without any luck. I started using these strips and found out that even when I have a normal 28 day cycle, my body didn’t actually ovulate until Cycle day 18-19 most of the time. This helped us so much with timing, which as you know is literally everything when you are TTC!

I won’t go into the details, but ya’ll this stuff works. It just does! I had so many ladies recommend it to me due to their success when TTC. I know it wasn’t the only factor involved, but I firmly believe that it helped!

Just temping did not work for me, but it was so helpful to compare with my ovulation strips! That being said, I know so many people that tracking patterns in their Basal Body Temperature worked perfectly for! Either way, it is a great tool to have! A lot of time I would look at the patterns in my BBT and then confirm my suspicions with a strip! This particular one has an app where you can log everything, as well!

4. Wait and See by Wendy Pope

This book was the single most transformational part of my journey while trying to get pregnant with Addilyn. It helped my heart find so much peace. It gave me a purpose during my season of waiting and took so much of the sting out of it! I would recommend it to literally anyone, even if you aren’t waiting on a baby. Grab it- you won’t be sorry!

I am a pen and paper kinda gal, personally! I used a plain, boring notebook back then, but I WISH I had had a pretty tracker journal like this one!! It helps so much to see it all mapped out!

Relax! Keep it fun! Its so stressful anyway, and if you are obsessing and stressing your partner out, it can make things harder!

Please know, sister, you are not alone! This is a hard season, and I am always here to listen! Shoot me a message on Facebook. I would love to hold your hand through your struggle! 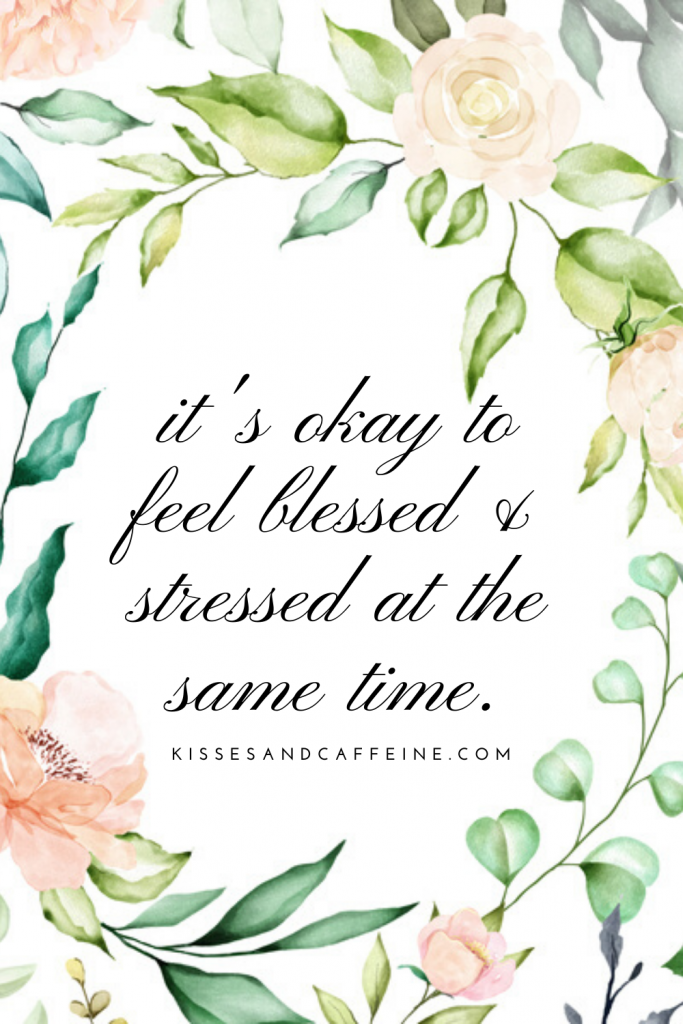 Why, so often, when a mom says she is stressed about XYZ in life, do we so often say “you are too blessed to be stressed!” Why can’t we just acknowledge that feeling overwhelmed or stressed out is a part of raising little humans? That feeling stressed or overwhelmed is not in any way negating that we know how very lucky we are to have our family!

Why do we shame for feeling the need to clean or work, telling her to just ignore it and enjoy the moments? I know for me personally, the sentiment evokes an extreme sense of guilt. Like I need not feel the things I feel, because that means that I am taking my life for granted. I am sure that I am not alone in feeling this way, either! It’s no wonder that postpartum depression is on the rise. You can enjoy the moments and still feel like you need am minute to clean your house and get your act together!

Mamas! It is absolutely okay to be blessed AND stressed at the same time! There is not one single thing wrong with feeling the pressure, and that does not mean that you love your family any less. If anything, I think it means that we love them more.

And if you are someone who typically echoes the “too blessed to be stressed” sentiment, cut it out! Instead ask, “How can I help?” Or if you are not close by, “How can I pray for you?” Let’s band together, ladies! We are not alone! (Even if this quarantine makes you feel like you are!) 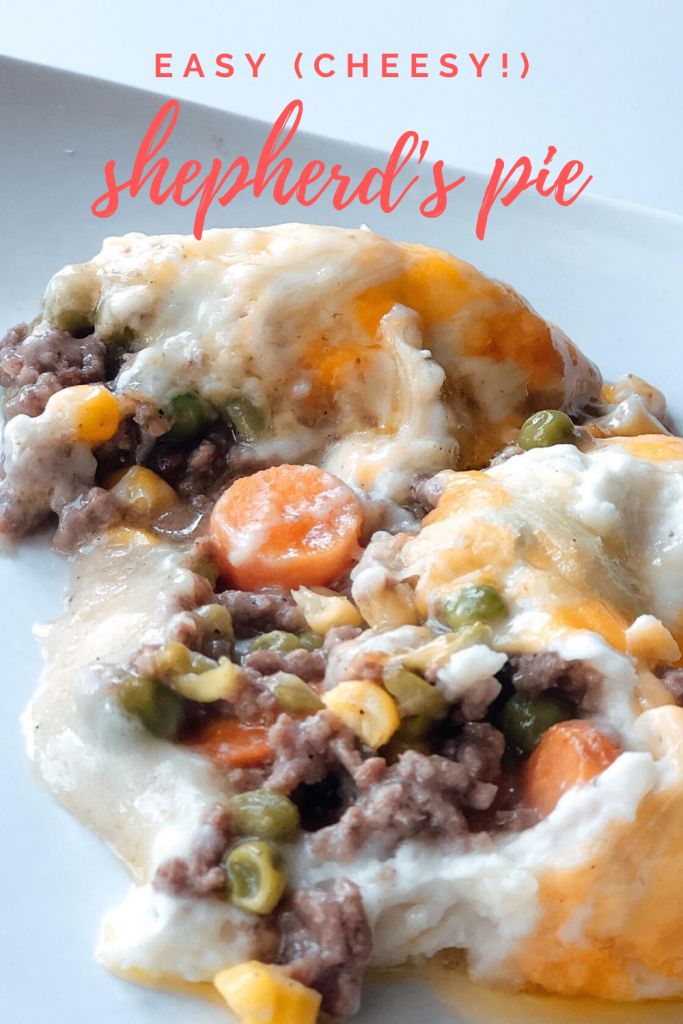 Shepherd’s pie is one of my favorite comfort foods. It is also a great way to use up random ingredients that are about to go bad! We stocked up on ground beef a few weeks ago and some of it was on the verge of freezer burn, so I whipped this little recipe up. To be honest, it is one of my favorite recipes I have ever created! Super simple!

First, I sautéed my carrots in olive oil to soften them up a bit. Then, I added the ground beef and cooked it until fully done. I love making dishes like this in my cast iron skillet, since it easily goes from stovetop to oven! 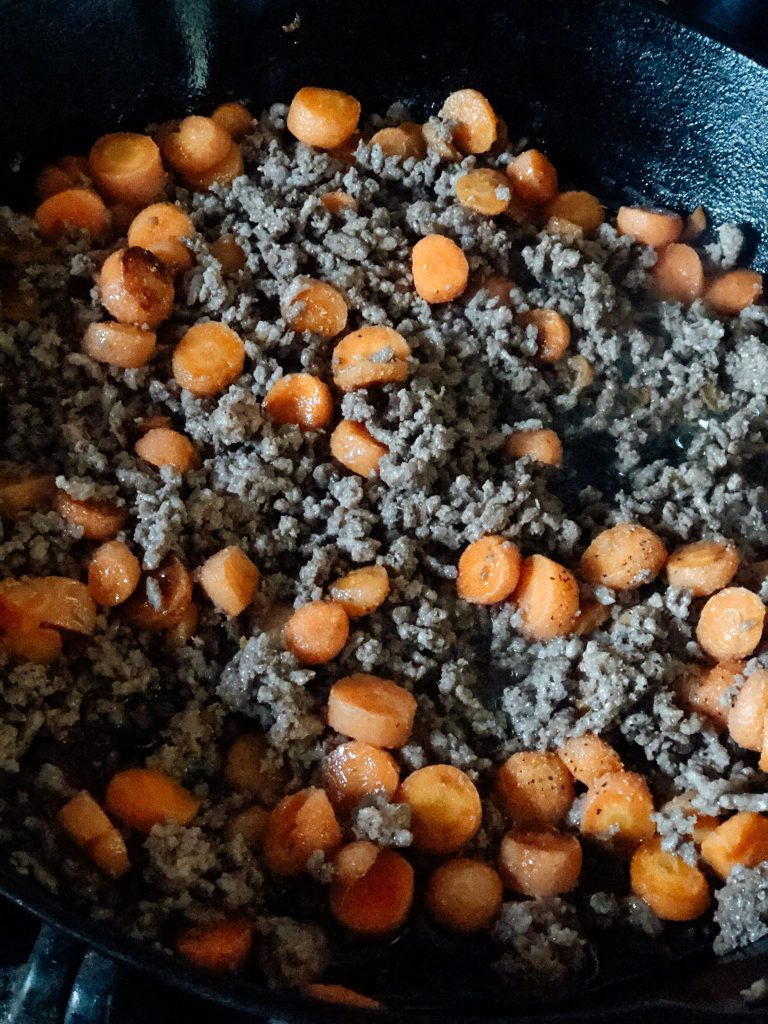 Add salt and pepper to taste! Once the carrots are soft and the beef is fully cooked, add the frozen peas and carrots! If you don’t have fresh carrots on hand, a big bag of frozen mixed veggies works great! I was just trying to use up my carrots. 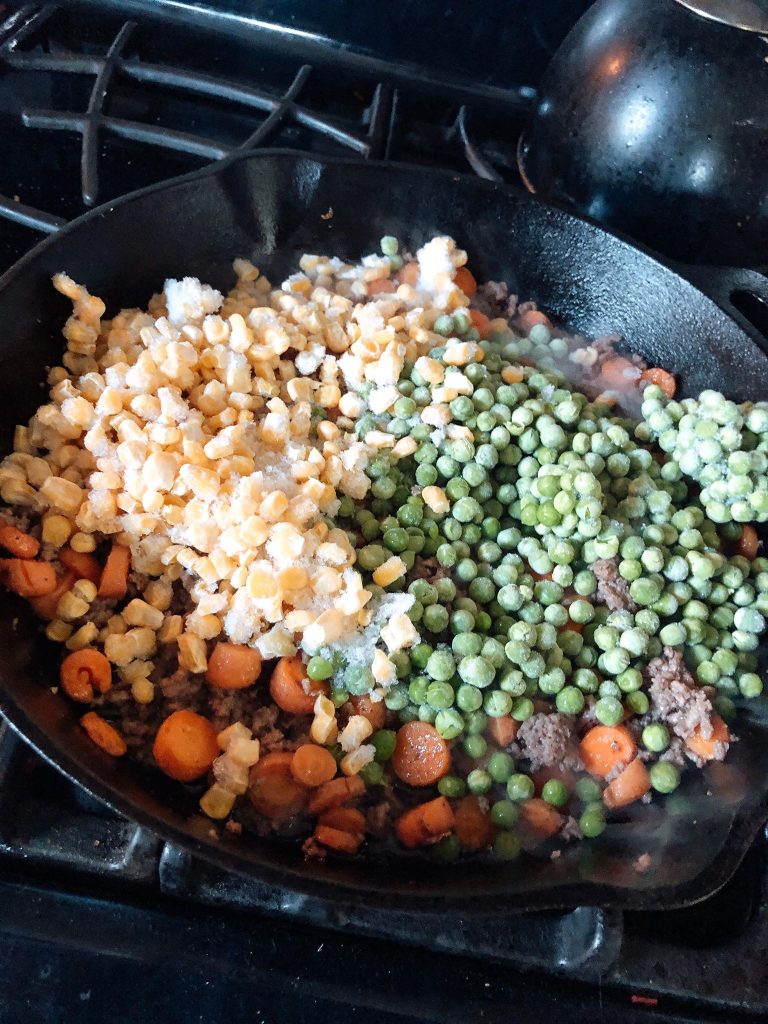 Mix the flour in very well and cook for 1-2 minutes, stirring constantly. 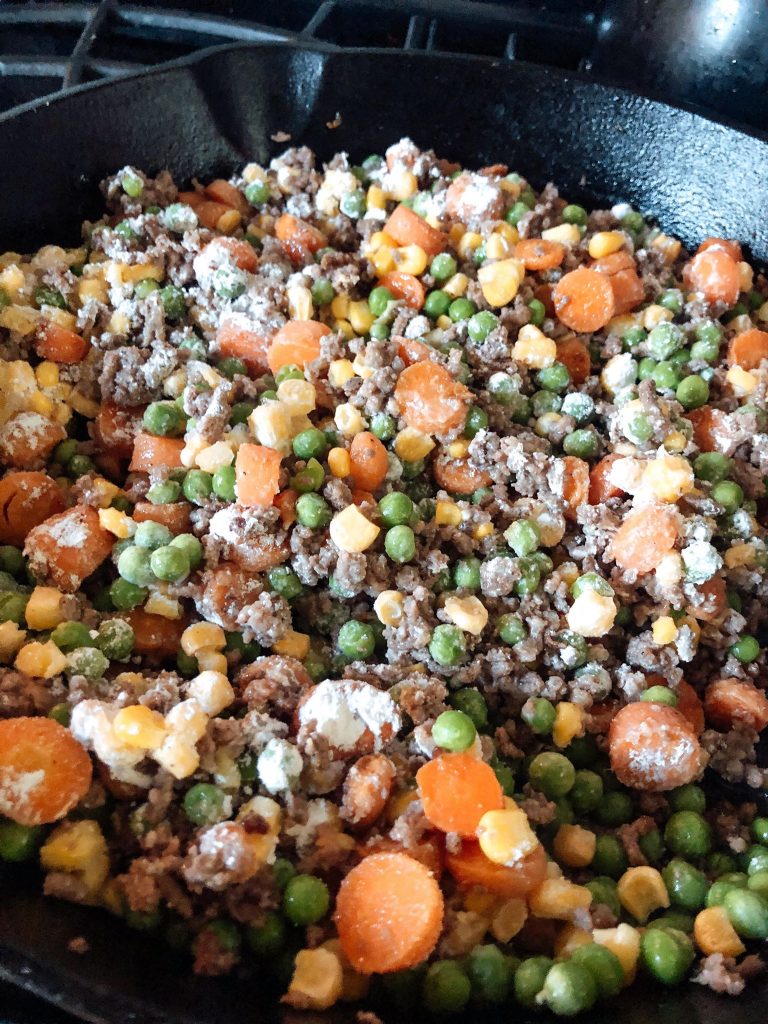 Add in the beef broth, garlic powder and onion powder. 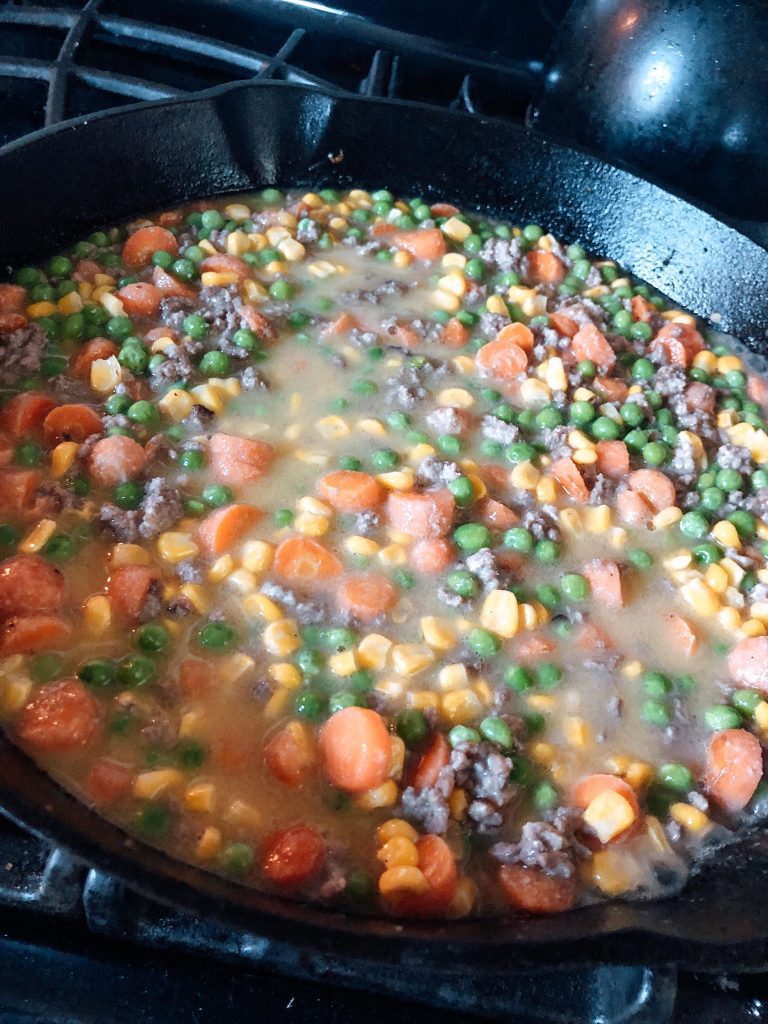 Simmer for 3-4 minutes until the gravy thickens. 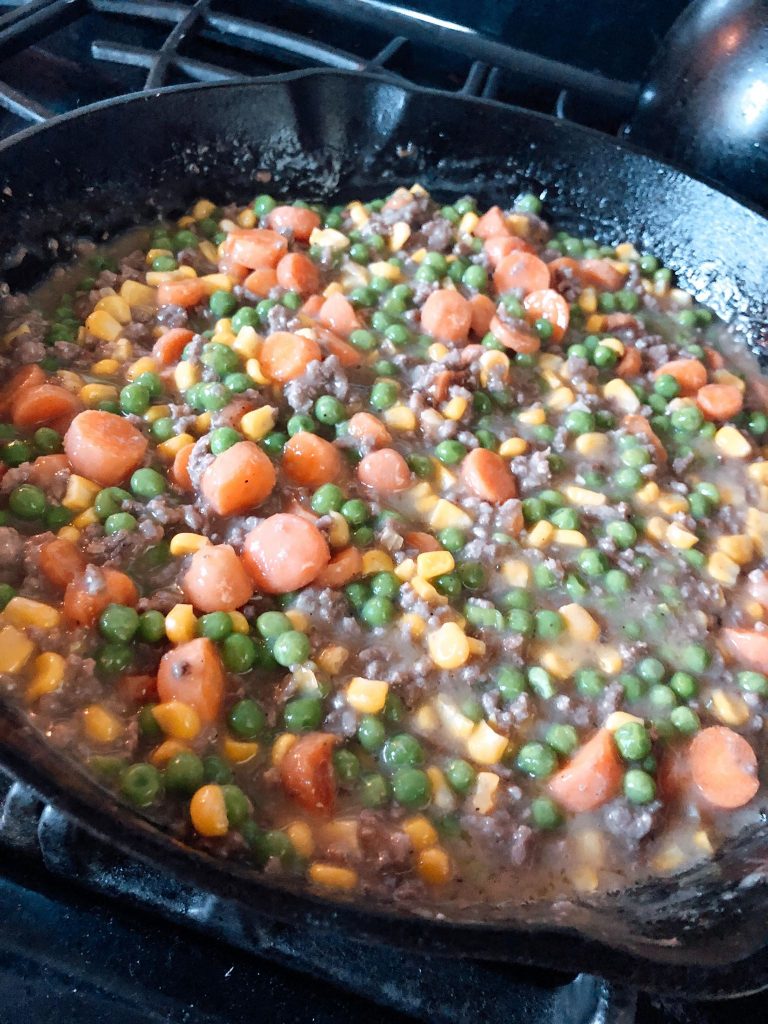 Top with mashed potatoes. I used a family size package of Bob Evans brand, because I had them on hand and was being lazy. You could totally whip up a batch of your own mashed potatoes and put them on top. 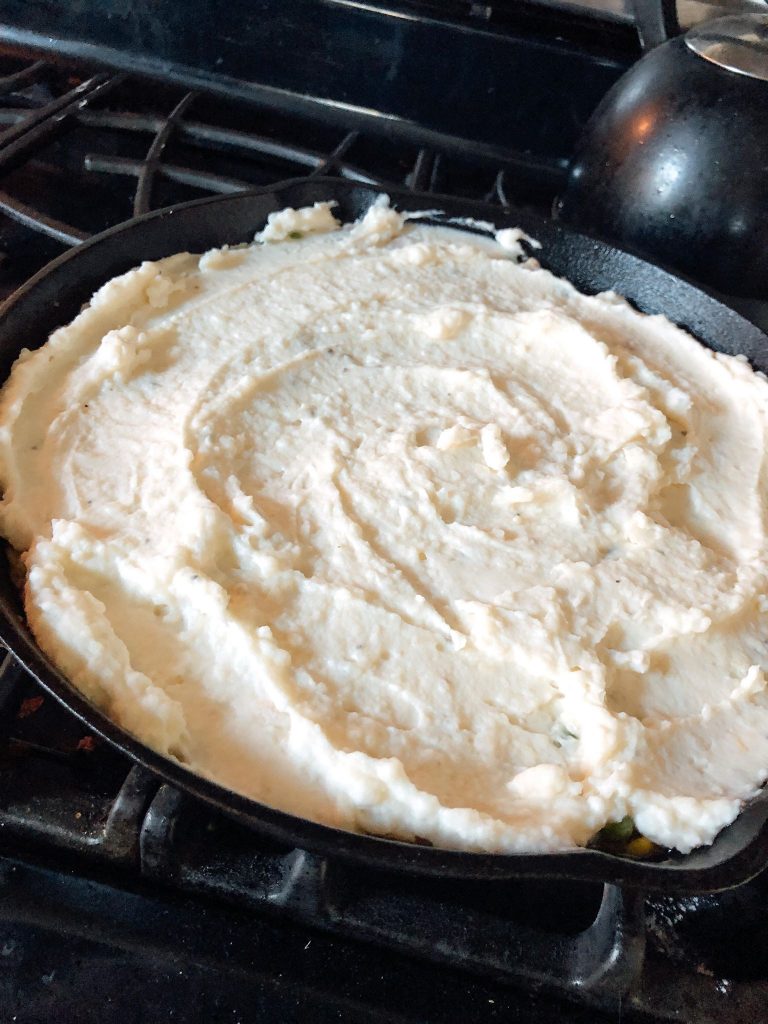 Stop for five minutes to get the baby to sleep. just kidding…that’s only for me! 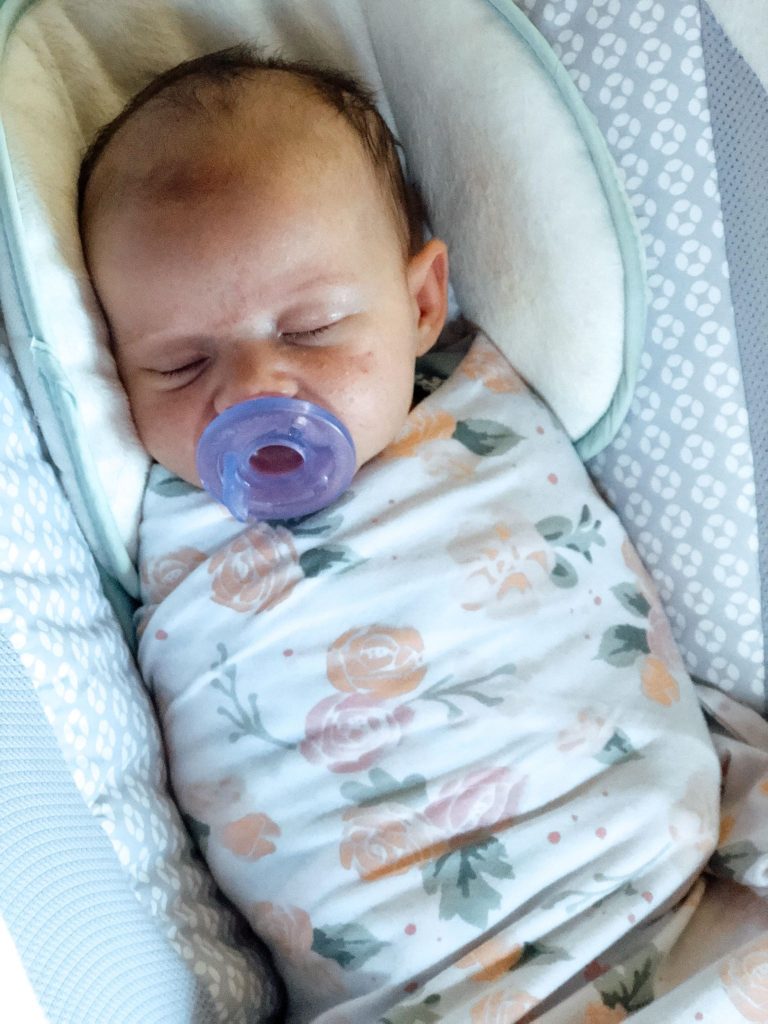 Top with the cheese and pop that bad boy into the oven! 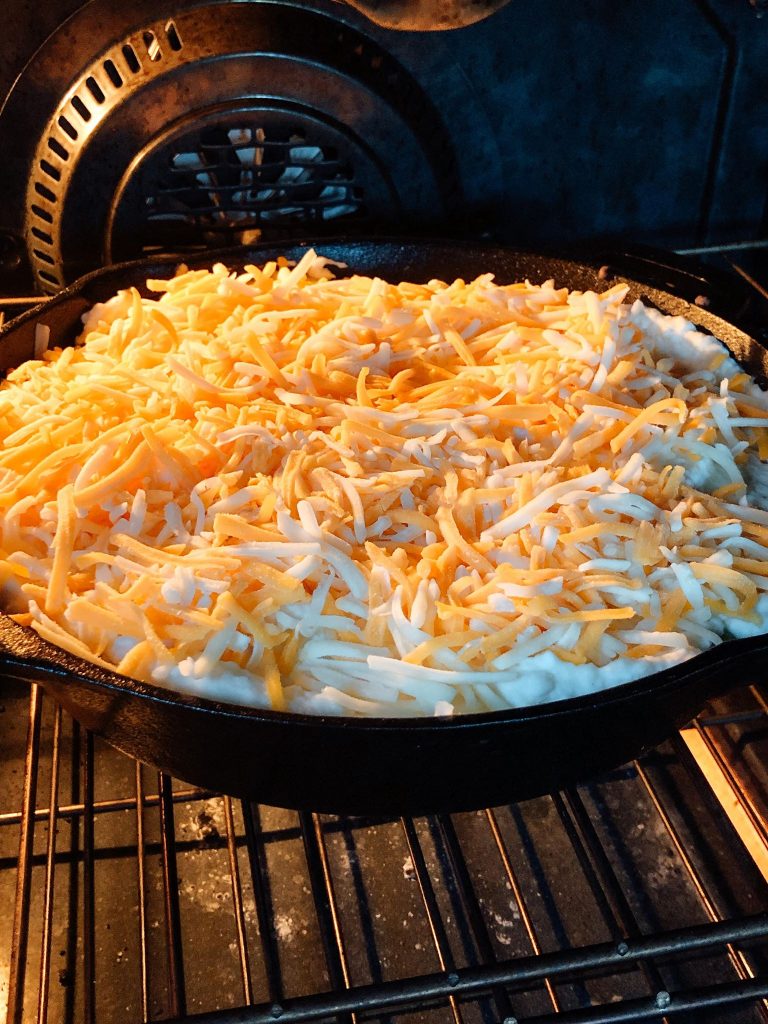 Bake until your cheese is all melty and just slightly browning on top. 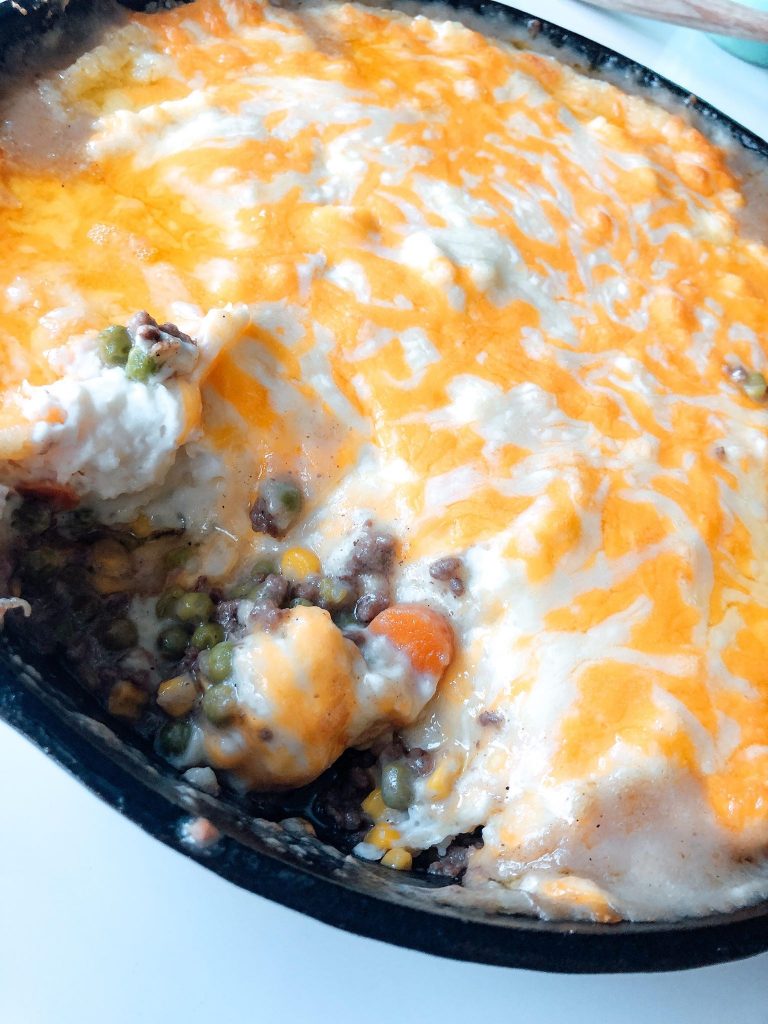 This was absolutely delicious! My toddler loved it, and I am always game for things that help get her to eat veggies! 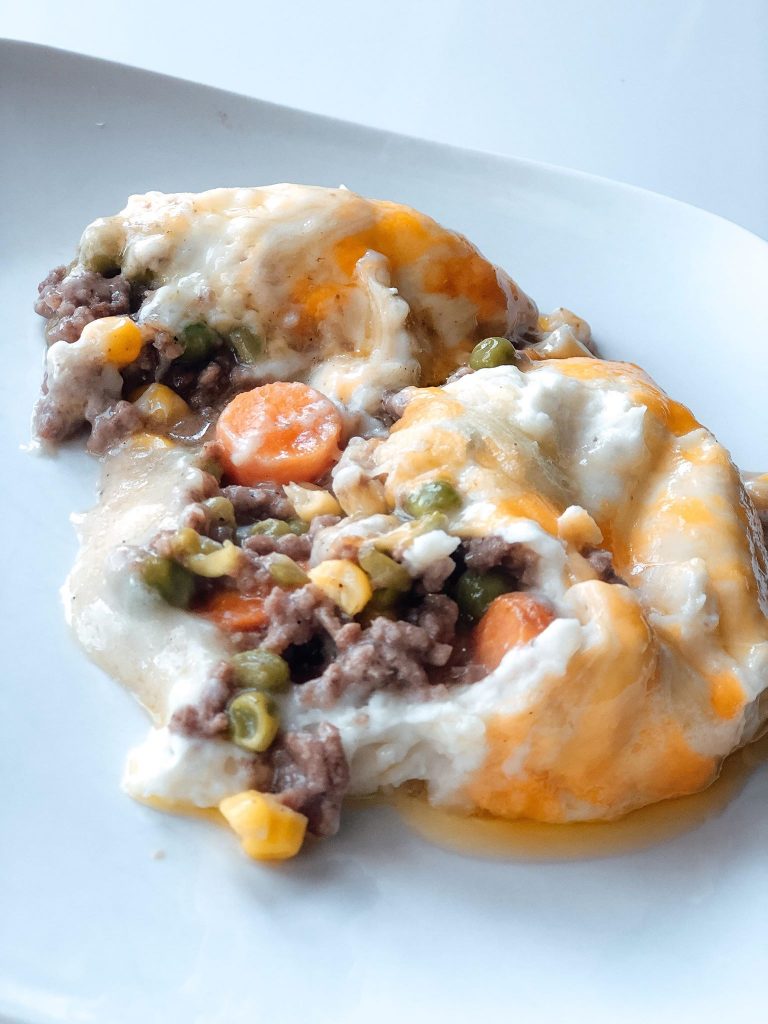 That’s it! A super easy weeknight meal that is savory and comforting!

* you can use a large bag of mixed frozen veggies in place of the 3 veggies if that is what you have on hand!
Directions: