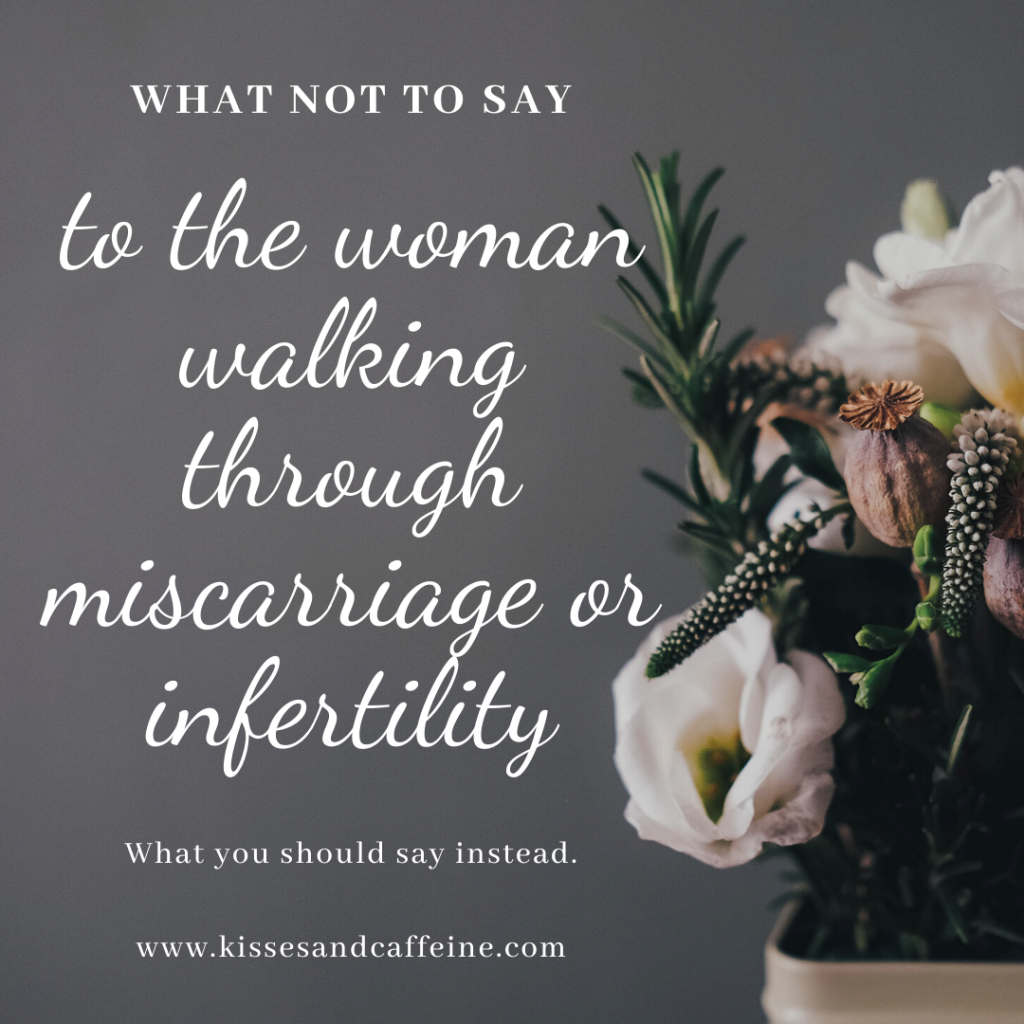 This post is meant to educate, out of love. At the risk of possibly stepping on a handful of toes, I wanted to help the general public, who hasn’t suffered the loss of a pregnancy or endured infertility, to understand the things that you should never say to a woman (or her spouse) that is walking that road. I truly do believe that most people have good intentions and are trying to be helpful, and until you have been there you may not realize the way that your words can sting. The person that you say them to may never tell you that your words hurt, but they have the potential to ache for years. I hope that this list will help to start conversations and provide options that may be better received.

First and foremost, I am going to share what you should do. As someone who has gone through infertility as well as lost a child (more of our story here), I can say firsthand that this makes all the difference in the world. Working with women every day in my ministry, I see this play out for just about every situation. When someone you know and care about loses a baby or shares their struggle with you:

ASK. VALIDATE. LOVE.
And then RESPOND.

Let me say it louder for the people in the back: It is not your job to fix someone’s pain. That is God’s job! We simply need to love people.

Now, onto what you should NOT say! These quotes are things that I hear often, and most are taken verbatim from women who have been there. I am breaking them down by category.

If they already have children:

“The most hurtful comments that I got after my recent 2nd miscarriage was: ‘It was not meant to be, you have too many kids already!’ But the worst and most hurtful was: ‘You’re better off, 3 kids is too much. A 4th? You’re crazy!’ There is nothing more I love than being a mom.”

“The most irritating thing so far with having ‘unexplained infertility’ is people saying, ‘You already have two healthy children. Do you really want to start all over again?’”

“’At least you already have a kid. You can always try again.’ As if I hadn’t already formed a bond with the child I was carrying and full of love and hope.”

“You guys don’t need another kid, you have three already.”

“‘At least you have one child. You should be happy with that.’ So now not only are you depressed about no more kids, but you feel like crap for feeling that way.”

“Both miscarriages after my boys I got told ‘You should be happy you at least have them.’ Umm of course I’m happy I have them but my heart got ripped out with each baby that passed away….”

“‘If you had that baby you wouldn’t have your others.’ Which I don’t think is true at all!”

“You have kids already, really you should be thankful and not selfish.”

“I was told I ‘really dodged a bullet’ because I didn’t need anymore kids.”

This one in particular burned me up and caused pretty bad harm to my relationship with God and the strength of my faith. As a long-time believer and someone that works in ministry even. So I can imagine how much harder it may hit someone who doesn’t have a strong walk with the Lord (or any walk with Him) just yet. THINK about that. While many of these may have truth to them, they don’t really need to be said- as they can paint God in a bad light, or make the person that you are saying them to feel like they are not faithful enough or good enough.

“The worst comment was ‘You need to pray and fast, that’s why you don’t have a baby yet.’”

“Something was wrong with the baby that’s why you lost it.” “Thank God you lost it early.” “It wasn’t God’s will.”

“On Mother’s Day while I was going through infertility our pastor prayed ‘for all the mothers and all those who it’s not in your plan to be mothers.’ I left the church sobbing, forgot my purse and made my husband go back in to get the purse.”

“‘They’re in a better place’” comes across like I am not good enough.”

“Everything happens for a reason”- MAJOR pet peeve of mine!

“Your baby is in a better place now.”

“‘God’s timing is perfect,’ which I don’t disagree with. But it’s not a comforting thing to say to someone who’s been trying to get pregnant for a while. I already have a daughter which I’m grateful for, and she was literally an answer to prayer, but we so badly want to give her a sibling. We wanted to have a huge family and it hurts to not be able to get pregnant so easily like others do.”

“I was told that I may not conceive a baby due to a medical issue. I was constantly being told ‘in Gods time.’ I know at the time it wasn’t meant as bad but to a woman truly wanting a child it hurt.”

If you are thinking about saying this, don’t. Just don’t. Think of something else or just don’t say anything.

“All the ‘When are you going to have children’ and ‘Maybe you should just relax’ comments hurt too.”

“’Don’t think about it. Just relax and keep trying.’ It’s been 9 years, no baby…. I personally am on the verge of giving up.”

“It just wasn’t meant to be. You aren’t ready yet.” (HOW do you even know if someone else is ready? My heart had been ready for years!)

"It wasn't meant to be" or "Something was wrong"

“‘It probably just wasn’t meant to be,’ right after I told a family member that I had to have a D&C at 12 weeks pregnant. It hurt SOOOO bad, that even though it’s been years I still struggle to talk to this individual about anything.”

“‘Something was wrong with the baby, that’s why you lost it.’ ‘Thank God you lost it early.’ ‘It wasn’t Gods will.’ Those three were the hardest.”

“‘You’ve tried for a long time, but I don’t think your meant to have a baby, maybe it’s time to move on.’  I literally did everything I could to hold back the tears as a friend told me this. Super hurtful!”

“You should thank God you lost it. I’m sure there was something wrong with it.” Again, not helpful to say, even if there is truth to it.

“‘It was not the right time. You need to get over it.’” The best thing my midwife said was,’I wish I had a magic wand to take your pain away.’”

“It’s totally natural, means there was something wrong with the baby.”

“It happens all the time.” Yeah? So do car crashes and heart attacks. That doesn’t take away the grief that a family feels.

Trivializing the pain or loss

“At least you weren’t farther along in your pregnancy. That way you weren’t so attached to it yet.”

“The one that really got me came from someone extremely close to me. She told me a story about how she thought she was miscarrying, but it turned out it was just her period. As if I was mistaking the pain I was going thru as ‘just a period’ when I had actually heard the heartbeat by that point.”

“After my miscarriage at 8 weeks this was said to me by a man at our church: ‘You can’t be upset over something you never had.’ I cried for DAYS over this… and 6 years later it still is in the back of my mind.”

“It wasn’t really a baby you lost.”

“There was probably something wrong with IT anyway.”

“At least you never felt a kick”

“It happens to a lot of people, it’s really common and not that big of a deal.”

“It’s ok, your brother gave me 4 grandchildren, that is plenty.”

Adoption, While a beautiful thing, is not everyone’s answer and doesn’t always replace the desire for a biological child! It is a calling. You should never push that on someone.

“Have you thought about adoption?”

“‘Stop trying and it’ll happen,’ and ‘you can just adopt’ are the two worst for me.”

Making the mother feel at fault

“You don’t need to have a baby now anyways, lose your weight and then try it.”

”You shouldn’t have been so active, that’s why you miscarried.”

Shaming fertility treatments or the desire to have a child

“You’re better off. Some people just aren’t meant to be parents.”

“Why are you wasting money on testing and treatments?”

“It’s selfish to do all of this when you should just be thankful for what you have.”

“If you were supposed to have children, it would happen naturally.”

Other things you just shouldn't ask or say...

“Why don’t you have kids yet? Aren’t you getting old?”

“Maybe you shouldn’t have waited so late in life.” Maybe they didn’t wait. Maybe they’ve been struggling far longer than you realize? You never know someone’s story.

Another sweet friend of mine who suffered a mid-term loss put it this way, and I feel that it is the perfect way to end. I truly hope that this may help bring some awareness to the well-meaning comments and some healing to so many women who are having a hard time. It has been a labor of love that speaks so deeply to my heart.

“I believe most people mean well. But just acknowledge that they lost their baby…no matter if it’s an early miscarriage, mid pregnancy or late pregnancy. Hopes & dreams of a life a mother has already envisioned for their unborn child already exist. Just be there for them & say a simple, ‘I’m sorry’ if you don’t know what to say.”

Sweet friend, if you are this woman, THIS ONE is for you. Much love from me to you.

I have a three-year-old. Enough said. I know all a

Let me tell you. This stuff is amazing 😍. I don

God sure knew I needed you. My tiny ☀️

Do you need to Organize the Refrigerator, but don'

A couple of months ago, a little girl who is very

Summer is here! For us, that means time outside, c

Just sharing one of my favorite Bible studies from