As someone who will avoid getting sick at. all. costs. the lovely side of early pregnancy that includes morning sickness is not my fav! I honestly have been pretty fortunate to mostly deal with only nausea, and I know some women have it so much worse than I have with any of my pregnancies. No matter what, this part is not fun! It was particularly more difficult this time with a toddler to chase around, and I have found a few tried and true things that were super helpful for me with with both pregnancies! I wanted to share them with you all in hopes that maybe a few of them can help a few of you survive! If you are in the thick of it, hang in there! For most of us, this will pass in the second trimester. Also, Make sure you clear any medications with your doctor, too! Everyone is different! 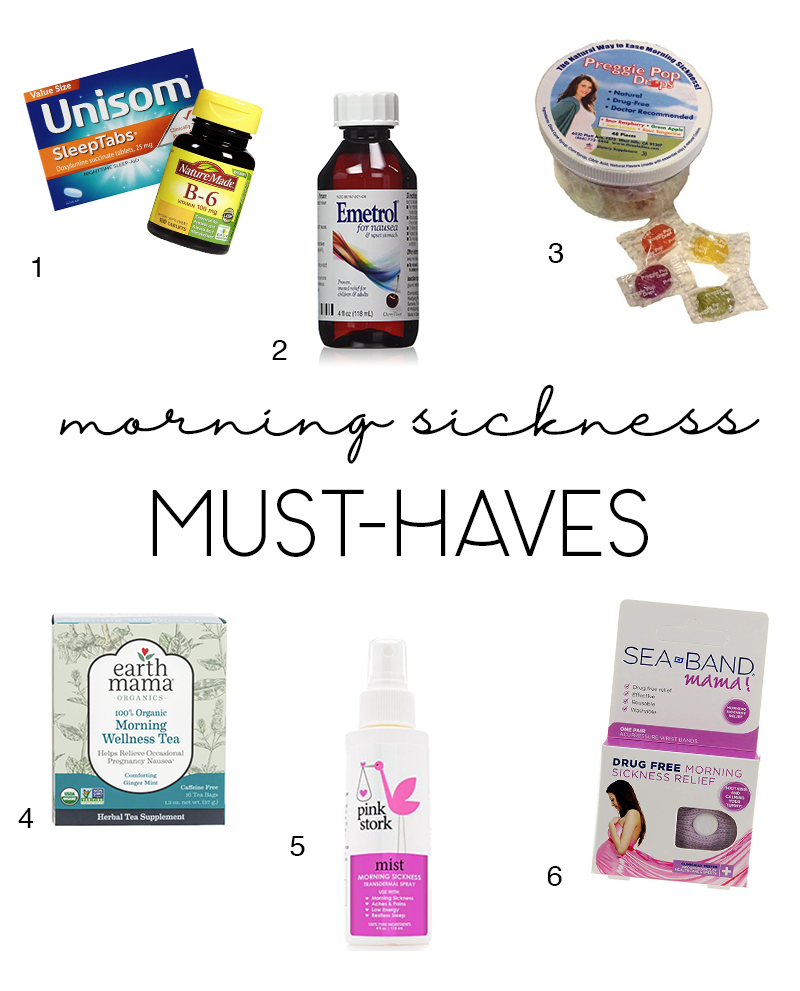 This was the MOST helpful thing for me! My doctor suggested this and I have had to stay on it with both pregnancies, all the way through! I tried to stop in the second trimester with Addilyn and the nausea was so bad that I couldn’t function. He told me to get these 25 mg tablets and take a half in the morning and half at night, mixed with a half of a B6 tablet (I used these because they are affordable!) as well. It has worked like a charm, and been a true lifesaver for me! If your doctor is okay with it, start here!

Another serious life-saver for me! My doctor told me that this was safe during pregnancy when I was pregnant with Addilyn and it got me out of a pinch quite a few times! I tried not to use it every time I felt a little nauseous (see #3 for what I did the most!), but in those moments when I was overwhelmed by it and about to lose it, Emetrol saved the day! Helpful tip- it is a bit pricey in the stores…Amazon has a multi-pack for a better deal! Grab it HERE. I kept it on hand at all times!

I HATE anything ginger flavored. I think it comes from some childhood stomach bug trauma and being forced to drink it, but the taste makes me gag. Which is very counter-productive when you already want to gag! A friend gave me a tub of these little babies with my first pregnancy and they saved me for every pregnancy moving forward! They work great in a pinch and help to stave of that nauseous feeling very well! They can be really hard to find in stores, so I kept a stash on hand from Amazon! In my nightstand, in my purse, in the car…I have had these everywhere!

I discovered this tea during my current pregnancy, and while it does have a slight ginger taste, it is balanced with other flavors and not overwhelming at all! I have loved sipping on a warm, soothing cup to help settle my stomach! I definitely recommend it, and at $5.99 for 16 bags, it really isn’t too pricey either.

I used this a lot during my pregnancy with Addilyn! I didn’t really need it this time because the other things I have mentioned worked great! But it was nice to have on hand. I simply spritzed it on my wrists once a day and it really was helpful! I know a few other mamas that swear by it, too!

These are awesome if you are looking for a drug-free alternative, and things on your wrists don’t bug you. I wore them with my first pregnancy as well as Addilyn’s pregnancy, and have used them on cruises, too! The acupressure really does help ease the nauseous feeling! They may not work as well if you have severe nausea, but if it is mild they can be a fantastic alternative!

When all else failed, I found it was super helpful to keep a bag of salty soup crackers and ginger ale on hand. The crackers helped when nothing else sounded good, but I needed something on my stomach to settle it down a bit. If I felt a wave coming, I would just grab a handful and snack on them!

Have you tried any of these, or something else, that was super helpful? Share with us in the comments!